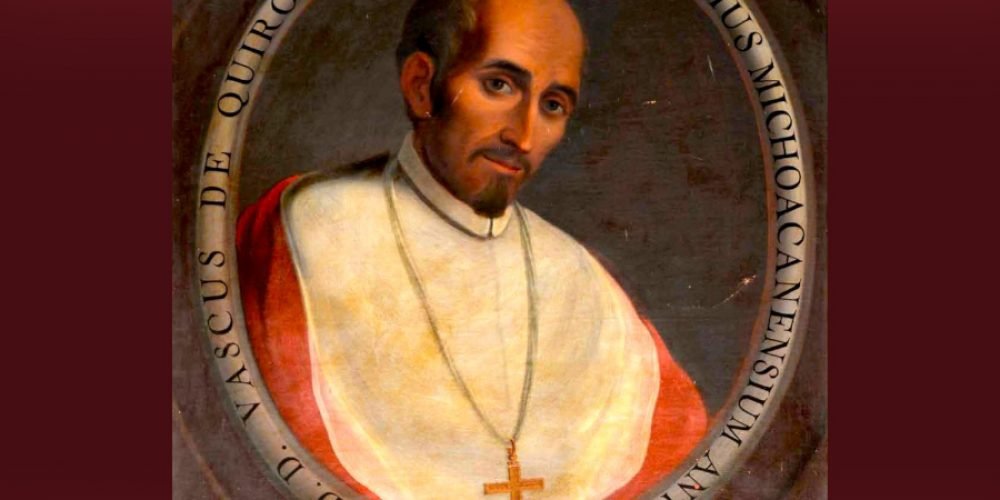 Don Vasco de Quiroga was without a doubt the most important and influential character in the history of Pátzcuaro at the beginning of the colonial epoch. He was born in the town of Madrigal de las Altas Torres in Spain, and was trained as a lawyer. In 1531, at the age of 60, this wise and dedicated man arrived in New Spain as member of the second “audencia”, an administrative and judicial body sent by the crown to govern the colony.

This group was commissioned to organize the territory and repair the damages of the first audencia, presided over by the corrupt Nuño de Guzmán, who used it to obtain power and control for his personal benefit. The news of the arrival of the second audencia was what provoked the brutal march of Guzmán towards what is now Michoacán.

Two years after his arrival, in 1533, Vasco de Quiroga organized his first experimental town, Santa Fe de México, named for its location near the capital city. In that same year he founded another town on the bank of Lake Pátzcuaro and called it Santa Fe de la Laguna, which can be visited and admired even today. Later, he founded the “hospitales” of Tzintzuntzan, Pátzcuaro, Uruapan, Acámbaro and Cuitzeo. These communities were essentially hospitals for the poor and boarding houses for traveling friars from other parts of the country. This hospitals were based in the concept of that the human being not needs only physic health, but material, moral and spiritual care also. So, the hospitals don Vasco founded, usually worked also as asylums, lodgings, churches, schools an charity houses.

Following his appointment as the first bishop of Michoacán, in 1540 Vasco de Quiroga had the opportunity to fully carry out his intentions to rehabilitate the Purhépechas, raise their standard of living and care for them. His plans included establishment of communities in which the land belonged to all, and each family also had its own dwelling and private plot. Labor in the common fields and farms was assigned on a rotating basis, permitting the natives to be self-sufficient and at the same time to have free time for instruction and spiritual practice, and also to work in specialized crafts, negotiated according to each worker’s preference. Thus, don Vasco -who became better known affectionately among the natives as “tata” (father) Vasco- continued stimulating the demoralized Purhépechas to form communities and develop different activities in each one. Before long, each town became dedicated to a particular product or handicraft, enriching some of the techniques introduced by “tata” Vasco with their own prehispanic techniques.

Even now, as throughout the centuries, Lake Pátzcuaro is fished with the same cotton nets whose fabrication was introduced by the illustrious Don Vasco. In addition, is possible to admire the polychrome lacquerwork of Uruapan, and listen to the rhythmic strike of wooden bats that forge the copper in Santa Clara del Cobre (today known as Villa Escalante ). There is more: in some of the most elegant dining rooms of our country and the foreigner is served meals upon the very fine china of Patamban, and the exquisite work in wood and ceramics gives life to the decor of thousands  of  homes throughout the world.  Don Vasco de Quiroga died in the city of Uruapan, March 14, 1565 at the age of 95. Thus closes one of the most important chapters in the history of Michoacán, because at his death the site of the diocese was transferred to Valladolid, the city favored by the viceroys to become the new capital of the province. His remains rest in the basílica of the Virgin of Health, which he founded in Pátzcuaro.

According to the beliefs of the natives of the region, the spirit of  “tata” Vasco still inhabits the lakes, valleys and mountains of this earth that he loved so much. There have been few people in history who have accomplished so much in what we call the “twilight years”. The veneration that the Purhépecha lavish on don Vasco makes him much more than a figure of the historic past. His memorable example, the institutions, crafts and trades that he created which still persist and have been enriched in different ways, all make this man someone out of the ordinary, and form part of a living present.